Some areas of Colorado simply don’t allow you to be too choosy about where to buy cannabis. They are rec only- if they have anything at all. Glenwood Springs is one of those places. It is squarely in the middle of Glenwood canyon along the majestic Colorado river. It is crammed with six lanes of interstate and as much civilization as humanity can fit in 400 sq ft. of available canyon floor. Just off of one of the crazy, clustered roads, right in the heart of the clusterfuck is Martin’s.

Martin’s is a rec only spot that almost feels like a smoker’s club. The vibe was relaxed and welcoming, fitting of the name choice. It is like you are actually going into visit with your buddy Martin. When I walked in, the younger budtender was educating the older hippie budtender on conscious hip-hop (most hip-hop is not bitches and hoes), something the hippie had never heard of. They had a few varieties of shrubs. They all looked great. Although they were rec only, their prices were competitive enough to keep me there.

I ended up walking out with some 303 kush. It looked ridankulous and smelled just as great. The herbs are mountain grown and come from all over. Martins is a third-party shop that does not grow their own herbs. Instead, they have an intrepid entrepreneur who buys from growers and sells them to you. The classic All-American middle man. And based on the selection at Martin’s, he has some good connections too. The 303 kush did not disappoint. It was flavorful and smooth. The prices were competitive with medical shops, which made me feel even better about my purchase.

The best thing about Glenwood Springs to me is not the two-block-long hot-spring pool or the escape room, but the nature of the world all around these springs. Out there, a mile can be a 1000 ft incline that is dominated by crystal clear rushing waters turned blue in their agitation. Trails are in the middle of streams out here. Massive misplaced boulders stand, waiting for Mother Nature to unleash her wrath on them and send them to their next resting place somewhere downstream.

These lands are still wild yet incredibly confined. Everything looks pristine and untouched from afar, but mailboxes and gates are as common as packed trails and lots of cars. People come here to experience the wild, untamed world. The world is quite tame, though. There are few rocks unturned here, and our presence is etching into the canyon more and more every day.

Gilpin County is one of my favorite places to go in Colorado. Its history dates back to the earliest days of Denver and the land reflects its boom-and-bust past in its steep cliffs, ghost towns, and mountain canyons scarred from the pick axe. They found gold in these Ute hills in 1859, and settlers flocked here hopeful for a taste of that sweet, sweet gold dust.[i] Before the Georgia prospector John H. Gregory got his taste, this was just some inhospitable land that was in the Northwestern Kansas Territory. This town quickly grew to nearly 2000 people as news spread.[ii] It was only a taste, however. The gold dried up as fast as it was discovered, and so did the population.

If you have ever seen the TV show Deadwood, then you can certainly get the vibe that Blackhawk gives off. It is where brutality carved out the wilderness before law and order rode in on his white steed and “civilized” the land. Not long after Mr. Gregory struck gold, Gilpin County was established in 1861. By the time the ‘80’s got here, Blackhawk was reduced to a row of trailer homes along a dirt road. Today, 64 historic homes have been renovated and sit on 90% of the available residential land.[iii] And one dispensary occupies a stretch of road just outside of town, Rocky Mountain Organics.

Keeping true to the wild west tone, Rocky Mountain Organics is in a mountain-type strip mall in a little mountain alcove off of an amazing Rocky Mountain road. Rocky Mountain Organics shares a lobby with its liquor store neighbor and had a Rocky Mountain dude running the spot. He had thick, fire chops burning his cheeks and he wore a Crocodile Dundee hat.  I normally stay away from recreational-use only places because they are so expensive. But, after we chatted for a while,  he gave me a really good price, so I went for some Mammoth.

The Mammoth is an indica. The nugz are dense and rich with color. It almost smelled soapy to me. There is a hint of capsaicin in the background. There is not much flavor to it. The smoke is smooth, however, and its effects are sublime. It is also a good start to exploring the oldest “civilized” part of Colorado’s mountains. There is so much to do out here. 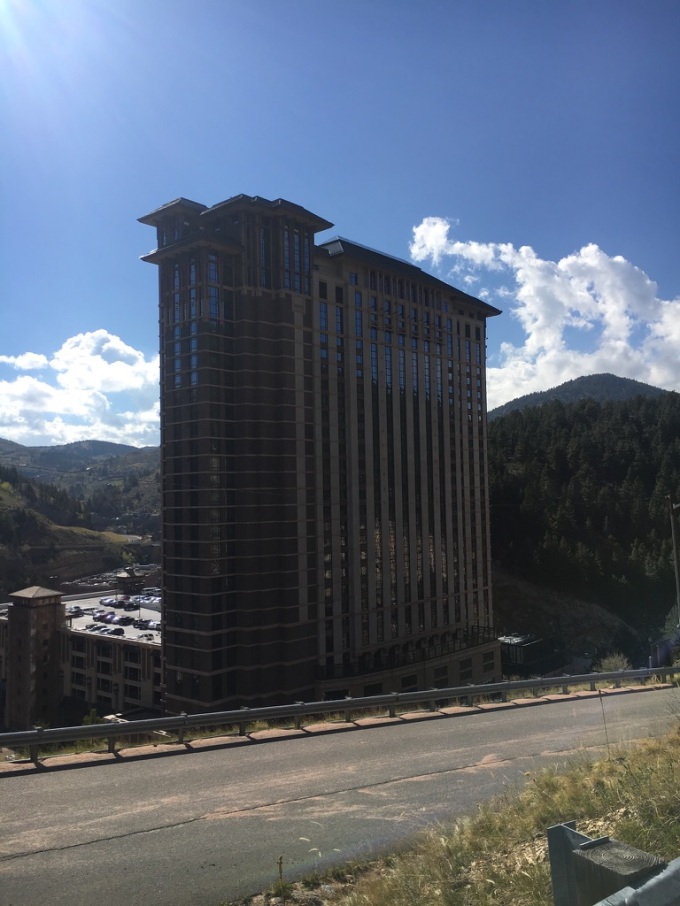 Gambling has been legal in Black Hawk since 1991.The narrow stretch of land in the steep canyon is dominated by flashy casinos. You can continue west to Central City (they have an amazing 4th of July fireworks show) for more casinos, or you can head south to play a round of disc golf in a ghost town. Head east, toward Denver, and you can find what was once the only resort west of the Mississippi that marketed to black people. It was called Lincoln Hills Country club, and it was in operation from 1925-1965. It is now on the National Register of Historic Places.[iv]

The towns out here are unique in so many ways. I crossed paths with a jeep carrying a pirate flag on one of these dirt roads. Just to the north is Nederland an all the nuttiness that comes with that place. Or you could go fishing in one of the many lakes and creeks around here. Then there are the hiking trails and rock climbers that dominate some of these sheer cliff walls… Long story short, these mountains (and indeed this world) are to be explored. What are you waiting for?