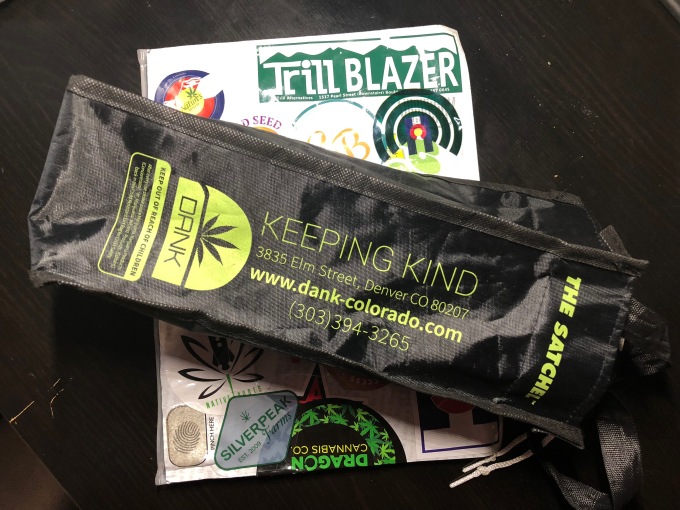 About 7 years ago, the newly-appointed director of the freshly rebranded San Diego NORML gave me a present as a gesture of gratitude. It was a black, smelly-proof backpack that he acquired from a client of his. I could think of a million times in the 90’s and early oughts that this bag would have been a lifesaver. By 2011, however, cannabis was my cologne. My car always smelled like it, my clothes always smelled like it, and I even developed an alter ego that shortened to Dan K. I was completely “out” as a stoner. And it felt great.

Then 2012 hit, and Colorado legalized recreational cannabis. The new law here in Colorado was full of padding and statements that minimal inappropriate impact in the community would come from these cannabusinesses. The exit bag was one of those statements. I was greatly annoyed when I bought my first bag in 2013 and had to buy an exit bag. It was usually a cheap piece of plastic that had a locking zipper on it. Extraordinary measures were taken to appease the suburban voter who actually counts by putting things like this mild headache in Amendment 64.

I was also aware that our tribe was walking a thin line; by legalizing herbs, Colorado was blatantly and aggressively weakening its drug laws in the face of the federal government. The generations of children who grew up under the clearly flawed rhetoric of the War on Drugs are locked in a battle of the educated elite vs the gun-toting white southerner. This is not something sacred and wholesome like a gun. No, this was a bonafide drug. And it was soon to be sold legally around kids. The KIDS!

So I bought my exit bag for $10 or whatever. Everywhere I went, they dropped the hammer about the exit bag. It’s not like I can just go on craigslist and buy an AR-15. In fact, it is very much the opposite. These shops stick to the law like gorilla glue sticks to the linoleum. Some places even added their own little laws and said they could only allow their weed to leave in an exit bag that has their brand name on it. Other places were cool and just gave me one. (I have a ton of exit bags, as you can guess).

These bags also came in couple of styles. There were bags that looked like the Post Office Express Mail envelopes. There were others that looked like canvas wine totes. And then there was me, from the old school, with my empty Totino’s salsa jar that is ready for a refill. Cannabis is a consumer product now. The same people who brought you “meat is murder” are now shoveling petroleum products out the door (but that is a different story).

Things change fast in this new ganja game. They stick to the rules like they are the TSA, but the rules seem to change faster than the honest opinion of our President. I got some herbs yesterday, and my exit bag is now a brown paper bag with a staple in it. Maybe tomorrow I can bring my reusable jars. At least give me the same standards as an AR-15.