Cannabis plants are called “weeds” for a good reason: they grow because they can and they do that very well. But in the world of “dank”, simply grown herbs are not enough. There has to be a smell, a taste, a touch, and an all-around stoniness to it. As the market leaders increasingly become DEA agents and former AT&T executives at the expense of generations-old hippie wisdom, I started to wonder if the buds of my youth are just as mediocre as they are today and if I am having a case of “in my day“ (1) syndrome. For that, and a few other reasons, I decided to grow my own cannabis this season.

This was my second attempt at growing. My first time was decades ago under a high-pressure sodium light in a basement while in college. This time, it grew outdoors. I did it because weed should be free- at least to me.  There was a time when I would have wholeheartedly believed that it should be free to you too. But I have learned that the tool that makes capitalism grow is the middle man. The concept of opportunity cost gives the middle man the power to do all of the work for us. This is the age of corporate weed; the many generations of knowledge of the ganja farmer is now lost to the middle man. Now that the good growers are gone, if not stifled, I was eager to embark on my own and see if dank really was just a legend.

There was an organic, small business movement that really resonated with me in the 90’s in my hometown of Omaha (Danktown). My dumbass thought I was championing it by buying weed grown in the basements of my friends. It just seemed like the right thing to do. Out in the world, “small business” and “buy local” were buzzwords floating around back then. Cannabis was something that I had a lot of control over, as opposed to Kroger, who knows I will always be back for milk tomorrow. I don’t know any cows. I can’t change the major food market, but I can keep the ganja local- at least my ganja.

The main problem with corporate humans is that their food is money. We have to sustain their ever-growing appetites at the expense of a quality product. They learn cheats and tricks (like making your food need poison in order to grow) that meet the demands of the boardroom at the expense of the farmer. This pushed the experienced, quality growers out of the market and replaced them with the “yes men” that a good, healthy corporation needs in order to survive.

There will eventually be room for the small grower to make a living. Right now, however, the market is entirely too unstable as record supply meets daily falling prices.(2) Regulatory capture is also an incredible burden to overcome. This is the time for corporate beasts to find the real price floor of a retail cannabis market and where they fight it out on sales floors and on spreadsheets while I sit on the sidelines and… wait.

It took me quite a few years to demystify cannabis in my brain. Dank buds were like unicorns for me. Dank was incredibly rare and the stuff of legends. Everybody can plant some seeds and water them. That doesn’t get you dank. You can fix nitrogen-lock and give it the nutrients it needs, but still will not necessarily give you dank. Pest management can help, but also will not necessarily get you the unicorn you are looking for.

My little unicorns came into the world battle scarred. We had quite a bit of turbulent weather here in Colorado this year. The spring came in with hail and a ton of rain. One night, the hail attacked at three in the morning. The plants had just sprouted and were barely 4” tall. Most of the leaves were shorn off and their growth spurt never came. One plant even had its stem broken all the way down the middle. Yet they still grew. They lost their Alien Tahoe O.G. name that night and became Hail Damage Kush in honor of that storm.

hail-whipped stem
Growers are like mad scientists. They have particular personalities and it shows in the herbs that they grow. Some are freewheeling and happy, inviting their family in to help with the grow and it is like a party every time you visit. Others are regimented and quiet, refusing to allow anyone into their sanctuary. The one thing that they all do is pay attention to the plants and give them what they need when they need it most. Or don’t because the plant is satisfied.

I could have done better to react to the hail damaged sprouts, like adding aspirin to their water. But I didn’t listen to my advisor, and the struggled tp recover. Sure, they were ravaged by hail. But they kept growing. Every day. So, I kept watering. As the days dragged on, I established routines that kept me on task. It didn’t matter how tired I was after work, I had to feed the plants. They ate, then I ate. This is a big deal for a dude who ate almost every meal of his 20s and 30s at a mom-and-pop restaurant. Sometimes, I would even bring a book with me as I doted over them on nice summer days. I would read a couple of pages before noticing some new growth that needed to be pruned.

I fought daily with spider mites that never got bad and walked lightly around the yellow jackets and wasps that hunted them. I learned about the signs of nitrogen-lock and the constant war within the pH of the water that these plants consume. It was all stuff that this city boy has heard about for decades, but now has context.

The plants were constantly pruned and the stems were scrogged as they grew. Most scrogging is done with plastic. But I didn’t use the plastic screens for a variety of reasons; I simply don’t want to be throwing away any plastic trash at the end of the season. Instead, I used bamboo sticks and clips to train the main stem to grow horizontally along the ground instead of shooting to the sky. This way, the bottom stems, which usually have the lowest flower production will be the ones shooting to the sky.

Then autumn came and the flowers started coming in. They started to bulk up. There was no clear terminal bud on the plants and it started to look like a strand of cattails growing in my backyard. The buds bulked and I watched and constantly wondered if all this effort was for just some schwag. 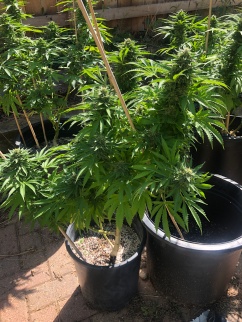 chonky buds growing
It wasn’t until I cut and started the curing process that I saw some potential for a good product. The first plant to come out of the curing room was the smallest and purplest. Lil’ Purp. It did not yield much at all. But what it did produce was a good start. The buds were solid and chunky. They quelled my biggest concern: buds full of sugar leaves and underdeveloped fruit: they always result in popcorn buds and trimming-induced crossed-eyes. This is the worst possible kind of cannabis to trim and fortunately it did not happen to me.

Since Lil’ Purp was the first to come down, so it was also the first to come out of cure. It had good flavor to it. It smelled and tasted good and is a behind the eye kind of high. Lil’ Purp is a classic one-hitter quitter that it sticks around for about an hour. It is clean and does not burn the throat, which means that it was flushed correctly.

Plants two and three came out of cure next. And they both turned out fantastically. These were the biggest, heathiest, and most likely to succeed. If these two worked out well, then 1) my endless search for a grower is over and 2) no more dispensary weed! The samples that I gave out came back quite positive. In fact, a horticulturist got jealous and challenged me to a grow-off. He gave me some seeds to plant and we will soon start the challenge.

The meat of my harvest gave me with a quarter pound of solid, dense, and thick buds. They are the kind that push back when squeezed. I was even rewarded with a few seeds. So much else is right with these buds that a dozen or so seeds is a good thing. They are the future.

Plant four was also quite thick. She came in at a healthy quarter pound too; with lots of healthy, fat colas. It also burned smooth, tasted good, and yielded expected results. And its hairs turned just days before an October snowstorm hit. Plant five, however, was a bit stubborn.

Plant five remained in its vegetative stage the longest. She grew the tallest and fully matured last. The crazy weather this year had me hauling me plants indoors a few times over the summer: I learned my lesson in the spring. The last October snow was its messenger of death. plant five wasn’t getting saved this time. Nope, snow was coming and if that is what it takes to make those stigmas turn, then so be it. She was going to get dumped on. Season is over. Mother Nature demands it.

It snowed all night. As I prepared my coffee and looked out the window the next morning, I could only laugh because she looked like she looked like a cat forced into a tub of water. She looked mad. Then, when I came home from work, her heavy buds were weighted down and she looked incredibly despondent. I kinda felt bad. But the stigmas changed, and it was harvest time. And that was the goal.

Not surprisingly, she was the biggest haul, at five ounces. Half of plant 5 went straight to the freezer for live resin, while the other half went to cure. I had no idea what to expect of snowed on, hail-damaged ganja. It turns out that I was just too paranoid, because the weed turned out just fine. Well, maybe a little harsh, but not nearly as bad as it could have been in my mind.

This entire year was an experiment that was a success.  Listening to herbs is like listening to people; you just have to pay attention. Growing weed outdoors is a daily micro-step on a nine-month path. If this is done, then growing good weed is easy. Most importantly, I learned that I can grow my own food alongside this fine cannabis just as easily. If I can grow weed that is better than the shops here are pushing, then I can certainly grow a tomato that tastes better than Kroger sells me. 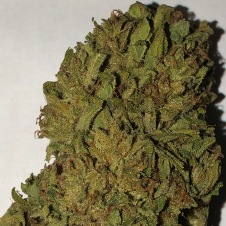 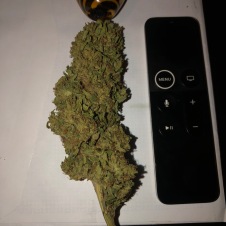 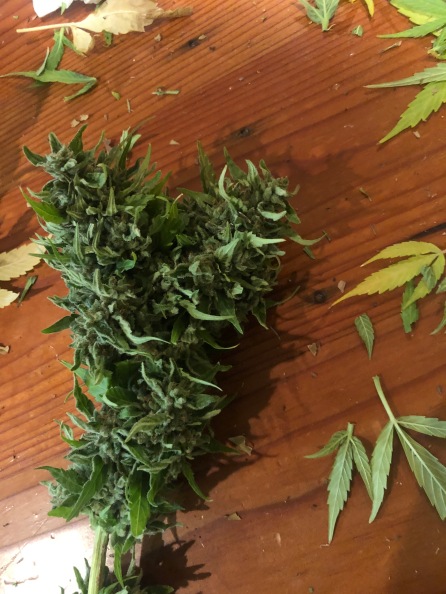 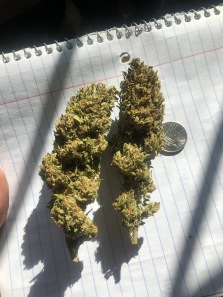 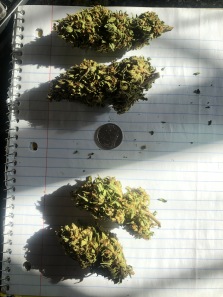