Donald Trump’s campaign started with his ad hominem birtherism attacks on Obama years ago ad nauseum. That gave him his footing in The Dixie South, which quickly became his stronghold. (Virginia was the only state in The South to vote against Trump, but they always vote blue.) He got 45% of his needed electoral votes (122) in The South.

The South sticks together, and cannabis prohibition is a component of the glue. This is the land where rum smugglers of old venerate the constant left turns of NASCAR. This land is littered with dry counties where moonshine is readily available. States’ Rights are at the tips of all of their lips, but only when buying and selling individual members of a family to work their cotton fields.

Attorney General Sessions got into the US Senate partially thanks to a different southern crop, tobacco. In fact, he had to return $2000 to the RJ Reynolds PAC in 1997[i] because they gave him more money than he could legally accept during the campaign.[ii] I can only assume these are the good people he is talking about when he says “good people don’t smoke marijuana”.[iii]

Who are these “good people”?

They are defenders of 40 years’ worth of more than “800 claims against cigarette manufacturers for damages related to the effects of smoking”.[iv] They lied to their own people so much that their own had bring lawsuits to recoup past Medicare fees that we all had to pay.

Mississippi was the first state to begin these Medicare related lawsuits against Big Tobacco starting in 1994. Other states quickly followed and Big Tobacco was quickly inundated with legal attacks from various states over the next three years. In 1997, after losing smartly, Big Tobacco joined with the states to ask Congress to settle the case. Senator Sessions was their man.[v]

These good people primarily hail from North Carolina. North Carolina, is by far the largest tobacco growing state in the United States.[vi] Their lawyers argued for decades that their cigarettes were perfectly acceptable for human consumption. Why, then, should they be so disinterested in another agrarian crop? What is it about The South that insists that cannabis be embargoed?

Who cares? Frankly, it doesn’t matter. This cat is not going back in the bag. Before 2016, there were zero states in The South that endorsed medical cannabis. Now there are three. Those states are Arkansas, Louisiana, and Florida. Florida is a big deal because 71% of the voters overcame the manadated 2/3 citizen vote.[vii] Yet, the Legislature took it upon themselves to write the law to exclude smoking cannabis.[viii] [1]  As it stands now, none of the southern states have legal access to cannabis flower. Instead, they dance around their beliefs that a smoked plant is bad for, I guess, their “white women”.[ix]

This most recent election pushed the number of senators representing cannabis states (I will call them cannasenators) over the halfway mark. There are now more states representing cannabis in Congress than there are  opposing the herb. 217 is the median. Of the 435 Senators, 262 sitting senators now represent medical marijuana in congress. It has been steadily increasing since 2005. 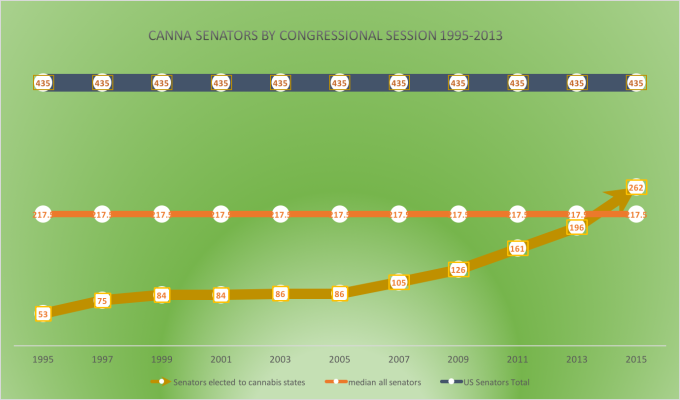 As Alabama raced to protect their proud lynching heritage, their native son, the Attorney General, reminds four free states that the federal government is in charge and states’ rights mean nothing. His genteel threat to the governors of these four free states:

“…would note the concluding paragraph: ?{sic}nothing herein [in the Cole Memorandum] precludes investigation or prosecution, even in the absence of any one of the factors listed above,in particular circumstances where investigation and prosecution otherwise serves an importantfederal interest.? {sic} Thus, the memorandum ? {sic}does not alter in any way the Department? {sic}s authority to enforce federal law, including federal laws relating to marijuana, regardless of state law.”[x]

Sessions is now the top lawman in the country, and the cannabis industry is one of the primary categories of American life that he wants to destroy. In California, his attack dogs are poking holes in Attorney-Client privilege as they search for a way to topple this pillar of justice[xi]. In D.C., he is trying to build a set of prosecutors who will work outside of the skeptical confines of the Justice Department and well within the polarized realm of the DEA.[xii]

Despite all of this, the industry is gaining influence in Congress every election cycle.  Congress has repeatedly cut funding off for the Justice Department to investigate legal cannabis businesses in recent years. The Cole memorandum was some much-needed clarification that has been DOJ policy since 2013.

The serious about-face of the new administration has sent ripples through the halls of Congress. But it is not anything new for the cannabis industry. We survived G.W. Bush. In his first term, we got two senators from 2001-2005. He attacked us hard. He put the pink jail in Humboldt County on the map. He even put Tommy Chong in prison. They tried poking so many holes into Prop 215 that it would fall apart. Yet, we got 21 more senators from 2005-2007. And another 21 in the next two years. That’s 42 senators in the last 6 years of his presidency.

It does not matter that impotent Republicans who fear for their seat in The House recently failed to vote for the popular Rohrbacher-Farr amendment, removing certain cannabusiness protections for those legal states.[xiii]. We will vote them out and put our own congresspeople in their seats.

Fortunately, the Senate did what they are best at and kicked the can down the line when they voted for the Rohrbacher- Blumenthal amendment in their emergency debt limit budget.[xiv] Legal cannabis states are protected- for another three months. Great.

Congress knows that something needs to be done about this. Congresspeople have grown bolder in their legislation, and new bills are constantly introduced that would reschedule, if not deschedule cannabis within the Controlled Substances Act. The latest has been brought forth by Senator Cory Booker. It is called the Marijuana Justice Act of 2017.

The following is a press release taken from the website of Senator Cory Booker:

“The Marijuana Justice Act seeks to reverse these troubling trends and fix our broken marijuana laws.

Specifically, the Marijuana Justice Act will:

o   Expenses related to the expungement of convictions;

o   Programs and opportunities dedicated to youth; and

There have been many bills that have come through that tried to deschedule cannabis. None have made it. Will this one? Time and civic activism will tell. The fight against fake laws is not yet over, and it is up to us, the voter, to remind the men and women of Congress that they represent the will of the people. If we don’t say anything, then they have no reason to respond. The lobbyists give them hundreds of millions of reasons to respond. We have only one: the ballot box. Tell your representative what you think of this bill. Remind them of the upcoming vote, and where you stand. Call them constantly.

Link to find your representative: https://www.usa.gov/elected-officials/

[1] Many of the cannalaws in the last 20 years have been amendments because the authors are acutely aware that many legislatures will do all they can to hijack these laws.